I was digging through a pile of old drawings from my days at college and I found some artwork I created on a computer in 1993.

I remember I created them on the office Mac, one a lot like this.

They were drawn using a mouse and the only drawing software available, Mac Draw which was bundled in with the Mac operating system.

Even back in the olden days of Mac tech there were Wacom type drawing tablets available, I used one a few years earlier on my BA degree, where I drew some even older digital drawings. I will try to find some prints of these if they still exist and post them.

At the time I drew these I was on the final year of my Masters degree in Animation and I was desperately trying to work out the story for my final film. At the time I was constantly drawing traditionally in sketchbooks at the time but I found this digital drawing process allowed me to quickly sketch through the huge amount of story concepts I was struggling with at the time.

I remember there was a stamp tool as part of the Macdraw software which I made extensive use of. It was handy for quickly visualising ideas.

When I graduated from my Masters degree in 1994, my graduation film was created totally traditionally on 16mm film, using hundreds of hand drawn, hand painted drawings. Although a few students created films with digital content, Computers were not quite ready at that time, not at least for college budgets.

Making these drawings did manage to create an early interest in the potential of digital image making. After all a computer is a device for drawing with, just as pen is… isn’t it?. 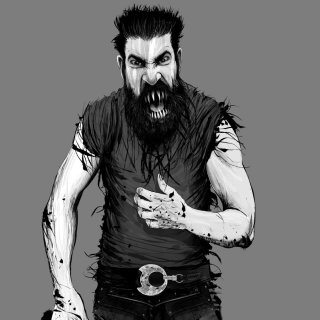 Beeny and Maple doing their thing. #catsofinstagram #catstagram
We adopted this orange fur ball one year ago today
This is where i’ll be this weekend #comiccon #comicssalopia2022 #shrewsbury
Any comic creators, artists or traders looking for a gig next month or anybody wanting to go to a convention with major comic artist guests. Comics Salopia is returning to Shrewsbury in June.
Hexa Eldritch book two is well in progress and is a lot of fun.
Loading Comments...